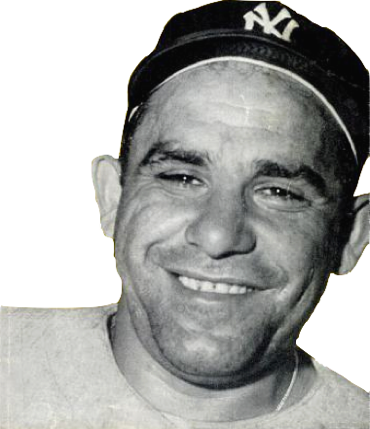 I usually devote my blog to science and fiction. But science is often accompanied by philosophy, and one of my favorite contemporary philosophers also happened to be one of the century’s great characters: the kind of endearingly quirky personage we often see attempted in fiction, but who rarely graces real life. Baseball legend Yogi Berra passed away yesterday at age 90. The Hall of Famer became a cultural icon with famously confounding quips like “when you get to a fork in the road, take it” and “no one goes there nowadays, it’s too crowded.” How many of these are correctly attributed to Yogi is debatable, but they are gems nonetheless. They read like contemporary koans, wisdom from a baseball Buddha. Yogi also helped write some of the most memorable chapters in the story of America’s pastime. Catcher and coach; 18-time All-Star; and one of only five players to be named the American League MVP three times.

I’ve been a Yankees fan since I was old enough to wear a ball cap (don’t hate; I was born in New York, and the lyrics of Take Me Out To The Ballgame guarantee my right to root for the home team) and I haven’t felt such bittersweet despondence for my team since Derek Jeter, my crush of 15 years, retired last season. Tonight the Yankees–and indeed, all of baseball–remember one of the most beloved characters in its story. My most often quoted “Yogi-ism” is “it ain’t over till it’s over”. I used it to rally hopeless college teammates when the rival school was kicking our butts; I use it when my Laddie gloats over a clever move in our board game and thinks he’s going to win; it’s my unofficial mantra for resilience and determination. Yogi’s time with us may be over, but his legacy and love remain with us. Like any favorite story, we’re sad when it ends, but its gifts will stay with us long after the covers close.