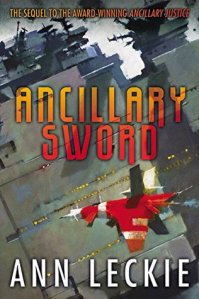 Ancillary Sword lacks some sharpness, but still holds an edge as unique science fiction literature. The story resumes where its predecessor Ancillary Justice left off. Breq, now captain of an imperial ship, embarks on an errand to a neighboring star system where social conflicts simmer. Leckie seems determined to include the panoply of trending laments: colonialism, the plight of marginalized people, emotional abuse, economic inequality, and more. I’d rather have seen the story explore one or two of these themes thoroughly instead of attempting a grand tour. It starts to feel like an extended analogy. Even the signature play with gendered language becomes a bit disorienting among a larger cast of characters.

Overall it’s an enjoyable enough journey, but one without much urgency. The concurrent narrative device that supported tension in Justice isn’t present in Sword, nor is the captivating puzzle-box quality. Instead, microcosmic dramas unfold as slowly as lotus flowers. Tearoom politics and quietly conflicted relationships generate just enough momentum to reach the climax, then extinguish in a pop like a lone firecracker. The abrupt conclusion leaves the story feeling imbalanced. Furthermore, it’s almost identical to the first novel’s end, something like this (no real spoilers, just affectionate parody):

Breq: Ah, the various plots and betrayals I’ve suspected for the past 300 pages have proved correct. There’s only one thing to do.

Breq whips out her magic alien firearm and engages in a fight scene so fleeting, the reader isn’t sure it actually happens. Space wins.

Breq wakes up in medical, seriously injured but recovering, with her underutilized buddy Seivarden at her bedside.

Seivarden: Will you please stop trying to die righteously? I really care about you. Like, a lot. How can I possibly make that more obvious?

Breq: You could get me some tea…

The lack of interaction between those two characters in Sword disappointed me. In Justice, Seivarden (minor spoiler alert) went from being a selfish, arrogant drug addict to a loyal companion and an interesting counterpoint to Breq. Insular protagonists like her need a foil to reveal them. For example, in my Syzygy series, it takes Skye’s clever prying to draw secrets from taciturn Ash. Seivarden seemed to serve the same function for Breq, and I expected Sword to pursue that line. Instead the pair spends most of the story apart. One new character–a young lieutenant who recently experienced a trauma similar to Breq’s–holds up a partial mirror for the heroine, but their sole moment of demonstrable empathy ends too briefly for satisfaction.

Despite these missed opportunities, I still have an affinity for Breq as a protagonist: we’ve both learned to conceal our permanent anger behind a mask of diplomacy, just like we’ve learned to run through pain from old hip injuries. We both sing constantly (although not exceptionally well) and possess a curious affection for obscure folk music. I’d hoped this book would illuminate aspects of Breq’s past teased in Justice, but Sword offers few revelations and only modest character development. Maybe Ancillary Mercy will take pity on this curious reader and finally open the heart of Leckie’s intriguing sci-fi world.