Pressing his forehead to the cool window, Ash blocked out his companions and watched the pale, pocked surface blossom into detail. Solar panels winked like fallen stars around the rim of Shackleton crater. The colony itself, a cluster of domes joined by tubelike corridors, made raised scars on the moon’s skin. Compared to the glittering seas and vibrant sunrises of Earth, the world below looked grey and sterile. But the Shack was still home.

In the first post of this series highlighting the science behind the (barely) futuristic concepts depicted in my Syzygy series, we explored the proposed engineering of space elevators. Although such a structure would put the moon in relatively easy reach, the technology is still a few years away; however, we’re abundantly capable of building a functional lunar colony. And might not be as expensive or Earth-dependent as you think.

At a glance, lunar real estate isn’t terribly friendly. Only the near side can communicate with Earth (which is why my “Darksider” heroine, Skye, has to schlep from the far hemisphere to make contact). Impact craters and dead volcanoes characterize the surface; below lies an unmapped network of lava tubes. There’s no atmosphere to deflect deadly solar radiation. Temperatures can swing from more than 250 degrees Fahrenheit in the sun to -250F during the two-week lunar “nights”. Where could humans possibly reside in such a landscape?

A colony will require reliable energy sources, and certain points in the moon’s topography receive near-constant sunlight, perfect for generating solar power. These “peaks of eternal light” (PELs) are good contenders for hosting lunar colonies. One such place is Shackleton Crater at the south pole. Solar panels or heliostats on the crater’s continually illuminated rim could keep habitats warm and lit through the bleak nights. Some scientists speculate the crater’s shadowy interior may even contain water ice. These features make Shackleton a popular location for proposed moon bases, so that’s where I chose to set Ash’s home in Syzygy. Eponymously dubbed “the Shack”, my fictional colony relies on PEL arrays and uses automated machinery to mine both the crater and the surrounding lunar soil for resources. 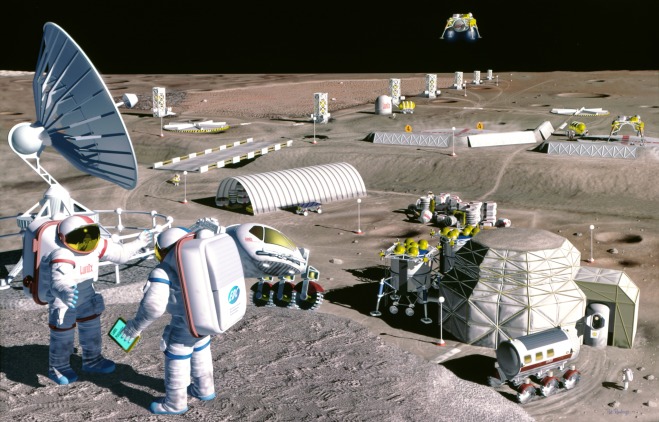 Lunar soil, called regolith, is more than just dust. With a few additives, it can be mixed into a sprayable substance that 3D printing robots use to build structures layer by layer. That’s right, we can print our own space habitats. The stone-solid final product provides temperature insulation and protects against dangerous solar radiation. Not to mention using materials in situ is much more efficient than hauling them from Earth!

Regolith’s chemistry gives it a lot of utility. It contains iron oxide, which reacts with added hydrogen to produce water. Those H2O molecules can also be split into pure hydrogen and oxygen for use in air supplies or manufacturing rocket fuel. (A hydrogen reduction reactor NASA tested on a volcano in Hawaii produced 1,455 pounds of oxygen from rocky soil, and an updated system can produce 2,205 pounds.) Silicon, another regolith component, can be use to make solar panels. With a ready supply on regolith, moon colonies could enjoy a surprising degree of self-sufficiency.

Not your Grandpa’s moon base

A lot has changed since the inaugural moon landing in 1969. Technological advances like 3D printing, robotics, and water-recycling toilets make living in space a lot more feasible for 21st century astronauts. The emergence of commercial space industries could also revolutionize our approach. A 2015 estimate suggested commercial spaceflight could get humans back to the moon for as little as $10 billion, about ten percent of NASA’s 2005 cost estimate. All those untapped resources in our orbit appeal to industrial entrepreneurs: last year China sent a lander to take samples in anticipation of mining helium-3, a fusion fuel believed to be more abundant on Luna than on Earth. A permanent lunar base also would offer many scientific opportunities.

Beyond that, the moon is an important gateway to the rest of our solar system. European space interests have proposed returning to the Moon within the next decade and using a lunar base as a launchpad for missions to Mars, just as the inhabitants of the Syzygy‘s Shack hope to do. A lunar colony might be science fiction today, but the components we need to build one already exist, and it won’t be long before we take another “giant leap” into permanent residence on our mysterious satellite.

This post respectfully dedicated to astronaut John Glenn, who made his final voyage earlier this week.

4 thoughts on “The Science of “Syzygy”: Lunar Colonization”