Maybe I entered the world of Barsk with poorly calibrated expectations. Lavish critical praise described a unique, thoughtful science fiction tale. I typically view such panegyric with skepticism, but the book’s premise sounded legitimately intriguing: in a galaxy of advanced sapient mammals, a planet inhabited by an ostracized elephantine race produces a unique drug that allows trained “speakers” to assemble memory constructs of dead people and converse with them. One speaker discovers he can no longer contact these departed figures and sets off to discover whether the radio silence has any connection to a prophecy the first Speaker made years before. 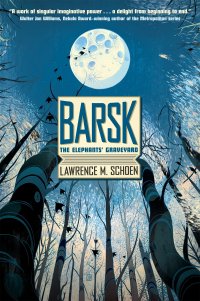 The setup evokes canonical sci-fi fixtures like Dune and the Uplift series, both of which rank high on my personal list of quality genre work, so I opened the covers of Barsk with excitement. However, 350 pages later, I found myself feeling as I almost always do after reading an extolled literary sci-fi novel: “did I miss something?”

Now, to acknowledge my own bias, I struggle with stories that indulge too many variables. A planet producing the pharmacological backbone of the galactic economy? Cool. Sentient animal protagonists? Sure. But pile on a haphazard collection of other inventions—psychics! Space elevators! Genetic engineering! Artificial gravity! Memory particles! Prophecies! Moons that seemingly transmit prognosticative data in some undisclosed way! ALL THE THINGS!—and each one further strains my suspension of disbelief.

It takes a truly masterful touch to synthesize so many concepts into a plausible tale, and author Schoen, though imaginative, doesn’t quite achieve either Herbert’s political nuance or Brin’s richly scientific world-building. It seemed like he couldn’t decide whether Barsk should be an anthropological sci-fi that explores a fictitious culture or a political thriller infused with intergalactic conspiracy, so he tried to split the difference. The result is an exposition-heavy narrative that struggles to gain momentum. Aspects of the tale invite parallels between the Fant and the Jewish diaspora, adding a layer of mild scholarly curiosity to the narrative, but a scavenger hunt for metaphors isn’t a story.

Strong characters might have made the plot more engaging, but I found Barsk’s cast largely one-dimensional. The affable heroes lack interesting flaws or compelling motivations. The antagonists behave like stock villains without subtlety or sympathy. One character who did pique my interest became a host body for a memory construct halfway through the novel and effectively disappeared from the narrative.

Barsk makes a valiant effort to tackle dense abstract themes like Love, Death, Memory, and Family, but without a deep attachment to the characters, it didn’t move me. If the author had put as much effort into dynamic characters as he did the world-building (which he seemed to enjoy so much that he filled two appendices with details he couldn’t fit into the actual narrative) Barsk might have lived up to its promise.

I wanted to like this book, in all its ambitious homage. But ultimately Barsk felt like one of its Speakers’ memory constructs: it takes on an archetypal form and communicates with you, but never comes fully alive.