The late Ursula K. LeGuin is one of my favorite thinkers on the writing craft. Her essays on the speculative genre, The Language of the Night, arguably saved my authorial ambitions from withering in an undergraduate English department. But I’d only ever read one of her novels. When she departed this plane in January, I resolved to make a more thorough study of her ouevre, starting with The Lathe of Heaven. (Minor spoilers ahead.) 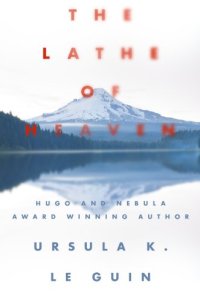 Overlooking the fact that it’s set in 2002 (LeGuin published the book in 1971), Lathe introduces us to a not-entirely-unfamiliar future. Climate change has wrought a world of fractious geopolitical alliances and economic disparity. No one really blames the protagonist, George Orr, for abusing drugs in such an environment. But when George attends mandatory drug counseling, a startling truth emerges: he uses drugs to prevent himself from having dreams that alter reality. These “effective” dreams retroactively reshape the universe in accordance with George’s subconscious desires. Dr. Haber, the ambitious counselor, seizes on George’s ability as a tool for power. Things quickly spiral out of control in a series of “be careful what you wish for” episodes, with each attempted fix only worsening the problems.

It’s a terrific premise, and LeGuin’s prose is striking as always. But Lathe never truly captured me. At less than 200 pages, it doesn’t possess the plot structure of conventional novels, meandering along at a steady pace rather than escalating the stakes. I could have overlooked this with stronger characters, but there are only two and a half of any significance. Timid George proves a frustrating protagonist, allowing himself to be used over and over. Haber, an apt but two-dimensional representation of man’s hubris, lacks any backstory to make him engaging.

And the half? In his one effort to extricate himself from Haber, George consults lawyer Heather Lelache, who–unlike the two men–immediately intrigued me thanks to LeGuin’s unusual arachnid-inspired descriptions of her, such as snapping her briefcase closures like mandibles. Lelache could have been my favorite character in another world…but in the ever-shifting world of Lathe, “effective” dreams quickly compromise her memories, downgrade her profession from lawyer to legal assistant, and ultimately reduce her to a quest prize. Coming from LeGuin, an author renowned for challenging gender stereotypes in novels such as The Left Hand of Darkness, this disappointed me.

Without strong characters or plot, is Lathe worth reading? Yes. It posits some interesting questions about society, destiny, and control. But I advise approaching it as a thought experiment rather than a fully realized narrative. Fans of Black Mirror, who don’t mind characters as pawns to stage a philosophical concept, will find layers of dystopian delight in Lathe. Science fiction lovers seeking a richer story may get impatient. Still, the book’s short length requires only a modest investment of time, and I found it well-justified in exploring the work of a seminal genre author.